Suspended solids and colloidal materials in feed water are one of the biggest problems in reverse osmosis systems. Even though most systems have some pretreatment including 5 micron prefilters, these fine particles are responsible for fouling of reverse osmosis membranes.

In order to have some measure of the degree of this fouling problem, a concept called Silt Density Index (SDI Testers) is used. Here a 0.45 micron filter is exposed to the feed water under pressure and filtration rates are calculated.

An SDI of less than 5 is considered acceptable for the reverse osmosis systems. This means that at values of SDI of less than 5, the membranes should foul at a very low rate. Even though the concept works most of the time, there are exceptions when a lower SDI (less than 3) is desirable due to the nature of the suspended solids in that feed water. 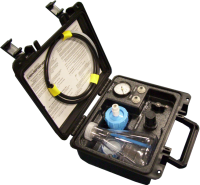 Simple SDI guides you through the test process and accurately calculates the SDI of the water automatically, eliminating manual calculations.

EZ-SDI Silt Density Index Monitor is designed for permanent installation to automatically and consistently monitor the SDI of RO feedwater.