Emulsified oily water presents a difficult treatment problem in a large number of metal fabricating and machining industries.  The conventional methods of disposal include chemical treatment, incineration and haulage by the waste disposal companies.  This paper describes a new approach for the treatment of the oily waste water.

A typical system would include pre-treatment (such as settling or screening), ultrafiltration and some post-treatment.  If the oil can be recycled, the post treatment is generally settling to increase the concentration of the oil.  If the oil cannot be recycled, the post-treatment is usually incineration. The concentration of the recovered oil can be as high as 90% oil by volume.

The ultrafiltration system dewaters the oily water solution up to 90% as it passes over the membrane system developed by Electrohome.  Each module contains tubes that act as the pressure vessels supporting the cylindrical membranes.  With each pass through the tubes water is removed and the oily water gets more concentrated.

The present systems are being used on a variety of oily water situations in a number of metal industries.  This paper discusses the data collected from these operating systems.  Examples of some of the plants in operation are given.  In most cases the savings in the haulage costs and reduction in the incineration costs can pay for the system in less than two years.  Where recovery is possible the payback is even more attractive.  Other advantages include the low energy consumption, minimal use of chemicals, and the simplicity of the systems.

Ultrafiltration is filtration on a molecular level.  Its basis is a membrane of controlled pore size which discriminates between large and small molecules.  The molecules retained by the membrane may be dissolved in solution or they may be visible aggregates.  The principle of ultrafiltration is shown schematically in Figure1 and Figure 2.

The liquid to be treated is applied against a membrane surface under controlled conditions of pressure and flow.  The membrane allows water and smaller molecular components in water to go through the membrane.  This stream is called the permeate.   The larger molecular components do not go through the membrane and get concentrated in the water.  This stream is called the concentrate.

The performance of an ultrafiltration process is defined by two parameters.  These are:

These factors will be discussed in more detail in the following sections. 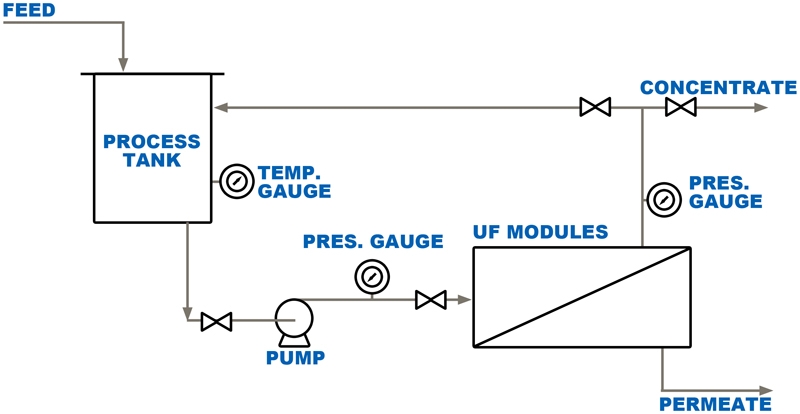 Factors Affecting the Performance of Ultrafiltration

There are several factors that can affect the performance of the ultrafiltration system.  These are listed below:

Emulsified oily wastes are produced in metal working plants.  These include machine shops, automotive plants, rolling mills, and others.  Emulsified oily waste is also generated in teh textile industry.  Typical characteristics of this waste are as follows:

The emulsified oily waste produces a disposal problem and is not acceptable to the municipal treatment systems.  The conventional solutions to this problem are:

The effect of certain operating parameterws on the performance of ultrafiltration systems was outlined in an earlier section of this paper.  Generally, for this application the following operations are used:

Membranes are therefore periodically washed using a detergent solution.  The frequency of cleaning is determined in each case by monitoring the performance of the system.  Usually a weekly cleaning is sufficcient to maintain a satisfactory level of performance.

Performance data for ultrafiltration systems have been obtained for several emulsified oil situations.  These include cutting oils from machining operations, wash waters from automotive plants, and rolling mill coolants.  The information was obtained from laboratory tests, pilot plant and operating systems. Although there are variations that can be made for most emulsified oil treatments.  These are listed below: 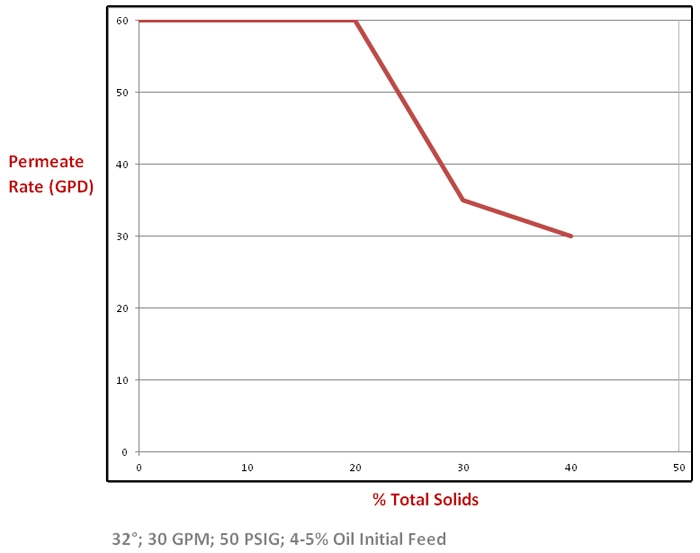 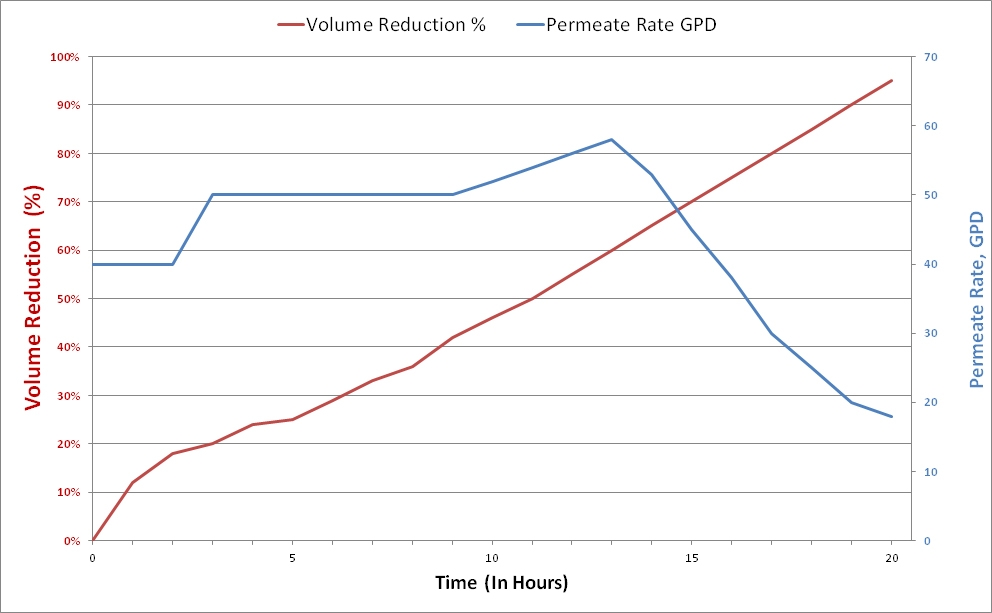 Economics of the Ultrafiltration System

The following example will illustrate the attractive payback of using an ultrafiltration system:

The capital cost for an ultrafiltration system to treat 2,000 gpd of emulsified oil waste water is $40,680.

A survey of the automotive plants in Ontario indicated that the disposal of oily wastewater costs an average of about $0.25 per gallon.  A summary of payback calculations for the ultrafiltration system is given below:

Ultrafiltration is an efficient and economically attractive solution to the emulsified oil waste problem.  The process is simple and requires no chemicals.  Where the oil can be reused the ultrafiltration makes a closed loop system possible.  The payback for the system is very attractive, even when there is no recovery of the oil.